Urinetown:
Music by Mark Hollmann; Lyrics by Mark Hollmann and Greg Kotis; Book by Greg Kotis.
Synopsis: In the not-so-distant future, a terrible water shortage and 20-year drought has led to a government ban on private toilets and a proliferation of paid public toilets, owned and operated by a single megalomaniac company: the Urine Good Company. If the poor don't obey the strict laws prohibiting free urination, they'll be sent to the dreaded and mysterious "Urinetown." After too long under the heel of the malevolent Caldwell B. Cladwell, the poor stage a revolt, led by a brave young hero, fighting tooth and nail for the freedom to pee "wherever you like, whenever you like, for as long as you like, and with whomever you like." A brilliant satire modeled off the plays of Kurt Weill and Bertolt Brecht, Urinetown is a wickedly funny, fast-paced, and surprisingly intelligent comedic romp.

Retrieving the Lamb:
By Judy Simpson Cook
Synopsis: Christmas comes but once a year. And for the folks in Travis Whitten's nativity tableau, that's way too often. Travis is irritable, domineering, and difficult. The usual Mary, Joseph, and angel are sick with the flu, the music director wants to change the music, and the church furnace is broken so it's either steaming hot or freezing cold. Travis faces some major challenges in mounting this production. She drafts her daughter, Carmen, and son-in-law, Glenn, to play Mary and Joseph, but they refuse, citing their upcoming divorce as the reason. A newcomer to the community named Angel wants to participate but Travis questions her past and her reputation. A local farmer, Joe Walker Hughes, brings his 14-year-old daughter, J.W., and her pet lamb to participate but she's only about five years old mentally and emotionally so Travis is afraid she'll ruin the scene. And, if all that were not enough to make the normally cranky Travis even more difficult, a terrifying storm comes up, leaving the church and its irritable inhabitants in darkness inside and J.W.'s lamb lost in the darkness outside. Travis tries to create her tableau anyway with reluctant participants in adverse circumstances. As Joe Walker goes out into the storm to search for J.W.'s lamb, the others are left to search for the love, compassion, understanding, and spirit of the season which they have lost. Fortunately, they are all assisted in their search by the warm, caring young woman named Angel whose past really is questionable: could she have come from Heaven?

Retrieving the Lamb is funny, tense, sweet, and sad-with just a touch of the magic we need at Christmas (and the rest of the year, too).

Proof:
By David Auburn.
Synopsis: On the eve of her twenty-fifth birthday, Catherine, a troubled young woman, has spent years caring for her brilliant but unstable father, a famous mathematician. Now, following his death, she must deal with her own volatile emotions; the arrival of her estranged sister, Claire; and the attentions of Hal, a former student of her father's who hopes to find valuable work in the 103 notebooks that her father left behind. Over the long weekend that follows, a burgeoning romance and the discovery of a mysterious notebook draw Catherine into the most difficult problem of all: How much of her father's madness-or genius-will she inherit?

Winner of the Pulitzer Prize for Drama, David Auburn's Proof is a passionate, intelligent story about fathers and daughters, the nature of genius, and the power of love.

All Shook Up
Inspired by and featuring the songs of Elvis Presley; Book by Joe DiPietro.
Synopsis: It's 1955, and into a square little town in a square little state rides a guitar-playing young man who changes everything and everyone he meets. Loosely based on Shakespeare's Twelfth Night, this hip-swiveling, lip-curling musical fantasy will have you jumpin' out of your blue suede shoes with such classics as "Heartbreak Hotel," "Hound Dog," "Jailhouse Rock," and "Don't Be Cruel."
*All Shook Up is a Special Production. Tickets are not included in the regular season. Tickets will be on sale at a later date closer to production.

Season tickets are on sale for those in attendance of The Addams Family: A New Musical. Visit the box office before the show or during intermission to be one of the first to get your 2022-2023 season ticket.

Beginning with the 2022-2023 Season, the OCT Board of Directors has decided to have all tickets be a flat rate. This rate will now include the ticket price, NC tax, and order fee. The price you see listed is the price you will pay. You will not see a significant change, but we are doing this to make everything as clear as possible. 2022-2023 TICKET PRICES

Purchasing a Season Ticket provides a discount on buying the tickets individually.

Take advantage of the savings and purchase a 2022-2023 Season Ticket! They will go on sale to everyone in June, but The Addams Family: A New Musical ticket holders can purchase theirs now! 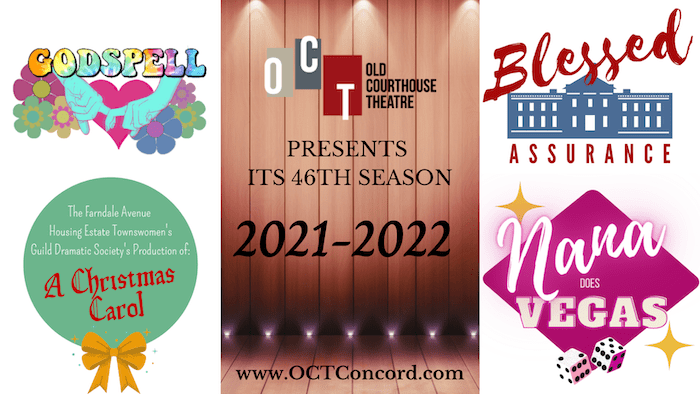 ​Old Courthouse Theatre was founded in 1976 and originally performed in the historic Cabarrus County Courthouse in downtown Concord. We are the area's only all volunteer community theatre, and we are always in need of more help. Please contact us to let us know if you can volunteer.

Each season consists of 4 plays, that typically run over the course of 2 weekends. We are located in the heart of Concord's historic districts and downtown's restaurants and shops. We encourage our patrons to head downtown for a meal before a show or drinks after.